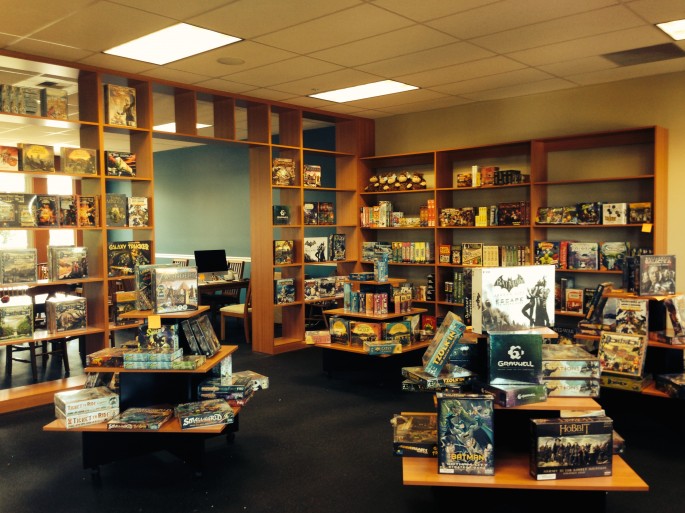 While I love hanging out and shopping in the Junction as much as the next guy, there’s has been one population that I’ve noticed is notably under-served: the gaming community. Not video games but board games, card games, miniature games, and role-playing games. That is, the gaming community had been under-served until now. Last Sunday, May 17th, Meeples Games opened in Charlestown Center (next door to West Seattle Runner). And I was there for the grand opening extravaganza.

For those who may not be entirely familiar with the role of game stores in the gaming community, here’s the deal: game stores are absolutely crucial in the development of an active gaming community. While most retail spaces simply exist as a physical place to sell products, game stores do much more. They serve as a hang-out spot; a place where gamers come together to just play. Game stores regularly organize tournaments, release parties, and other fun events which give people an opportunity to be a part of the community (and, yes, to buy more games). Up until now, West Seattle hasn’t been served by any game store. Meeples Games has changed this, though.

As I was saying, I was there for the grand opening extravaganza (and my friends Wes and Ransom joined me for the occasion). The day consisted of games, games, and more games! The store has a library of games which can be borrowed and played in-store for free while customers eat lunch or take a break from shopping. There’s a café, which is enormously helpful for when you’re worn out from several hours of back-to-back gaming. About half the building consists of the café and gaming tables, while the other half features the store itself. The store’s loaded to the brim with board games, card games, miniature games, and role-playing games (though it’s worth noting that board games are the most prominent). They have a varied and high quality selection of board games, ranging from European classics like Settlers of Catan to modern sci-fi epics like Twilight Imperium to hilarious (and awful) card games such as Cards Against Humanity.

I hope you’ll consider checking out Meeples Games to see what I’m talking about. You can find them on the web here.