I have been wanting to watch this movie ever since the first one came out two summers ago. I loved watching the first one with my brother, and it became our favorite movie to watch together. So, needless to say, I was super excited for this second film in the new Spider-Man franchise to come out. There were two things I was most looking forward to seeing: Andrew Garfield and Emma Stone. In the first movie these two had great chemistry and made the movie so much more dynamic because the brooding, “the world hates me,” Peter Parker needed Gwen Stacey to come in and keep him grounded. Also, aside from their on-again-off-again romance, I was really looking forward to the epic stunts and AMAZING special effects.

The Amazing Spider-Man 2 was directed by Marc Webb. The screenplay was written by Alex Kurtzman, Roberto Orci, and Jeff Pinkner and was inspired by the Marvel comics written by Stan Lee and Steve Ditko. The film stars Andrew Garfield as Peter Parker/Spider-Man, Emma Stone as Gwen Stacey, Dane DeHaan as Harry Osborn, Sally Field as Aunt May, and Jamie Foxx as Max Dillon/Electro. 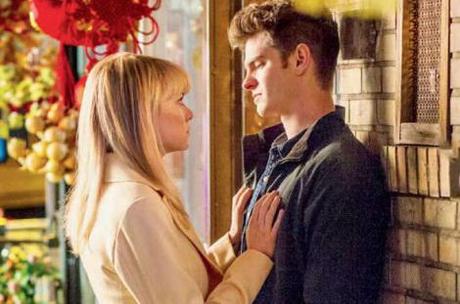 Things have changed for Peter Parker. He’s no longer just a rebellious teen; he’s far too busy saving New York City from the most dastardly foes to be messing around with anything other than his responsibilities. That is, except for being with Gwen Stacey of course. And he even comes close to missing his own high school graduation. But do you remember how I was saying that the only thing that matters to him is being with Gwen? Well that would be great except just before her dad died Peter promised that he would stay away from her and keep her out of the crime-fighting business. So these two have had to deal with that promise and all that comes with it on a number of occasions.

Of course, this wouldn’t be a Marvel movie if all Spider-Man had to deal with was girl troubles, so what do they do? Add the most powerful crazy super villain ever, who got his powers also from Oscorp. But I’m getting ahead of myself. Max Dillon is a shy electrical engineer at Oscorp who falls head over heels into a vat of hyper-powered electric eels. Which, as I mentioned, turns him into a crazy super villain. Max, now choosing to call himself Electro, can absorb voltage from any source, float above the ground, and has some other neat tricks that Peter is going to find out really Hertz. And as we all know, the only one who can stop this re-volt-ing villain is, you guessed it, the love-sick teen Peter Parker, though he officially goes by the name the Amazing Spider-Man.

For me, the movie was all about the choices you make in your life and when you have to continue making the right ones even though the world seems to be against you. Heroes aren’t heroes because of one choice; they are heroes because they make the choice every day to be heroes again.

The visual effects in this movie were AMAZING. They flowed right into the real shots and made you believe that this movie was actually going on in front of you. A big part of the movie is Spider-Man’s webs. We don’t actually have the technology to make webs that can hold onto buildings, so in order for this movie to work the creators had to come up with the perfect formula for believable webs. And they did. Another awesome part of the visual effects were all of Electro’s electricity. Cars and other things were obviously going to blow up and they needed to be blown up by Electro’s powers, so the creators were also tasked with that job and they ended up with another win.

I loved this movie. I thought it was well-scripted and smoothly shot. The action scenes had you on the edge of your seat the whole time, but you were able to laugh and cry with this excellently picked cast. The whole movie was put together well, and regardless of how you felt about the film it was great to watch. I give it a 9.1 out of a 10.